WHY INSTANT DREADS ARE SO GREAT! 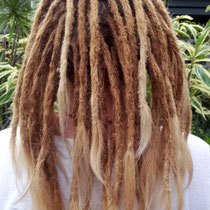 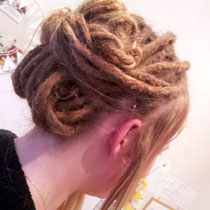 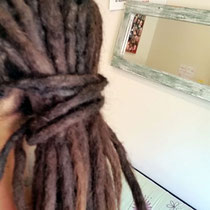 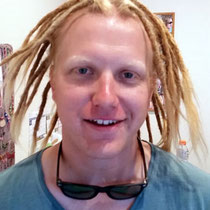 I have been creating dreadlocks instantly since the year 2000. I was introduced to the instant crochet dreadlock method when I got my own first dreads made in Thailand. That's the birthplace of instant dreads. Before some savvy buddhist monk decided he needed dreads immediately, (just kidding, I don't know if it was a buddhist monk - LoL) there was no culture, people's or race who knew how to create dreadlocks instantly, because without the magic crochet hook, it just can't be done without the dread needing a lot more work.

Traditionally, dreadlocks were formed by sheer neglect of the hair in living conditions many thousands of year ago when there were no showers, shampoo or products and with the daily dryness of the environment and dust around, peoples long hair locked itself up into knots. N o doubt their loving partners thought it looked so bad, so terribly messy that they separated the matted strands of hair and rolled them to deliberately work the locked up birds nests into nice neat cylindrical ropes, over time, with love, care and a shitload of patience!


Over the years more and more cultures chose to create dreadlocks and it always involved time and effort. From neglect and family worked dreadlocks came deliberately created dreads that involve separating clean flowing hair and backcombing the sections then rolling them to form a dread shape. Initially natural substances such as ash were used to "stick the dread together to create the dread"lock" and in more modern times wax is mostly used. But none of this methods really lock hair into a dreadlock straight way. It's only the process of  regular palm rolling and adding wax or other locking products that gets the dread to LOCK. And this process takes 3 to 12 months depending on the persons hair type and how much they wet their hair or what products they use to clean it etc.

When I travelled with my new Thailand made instant dreadlocks, I met literally 100's of travellers in a 6 year period of wandering the world, who had never heard of the crochet method. Everyone used to ask me how often I rolled my dreads or what wa I used to get them so neat and cylindrical. I explained I had never rolled them or used wax, ever and they couldn't believe it. They didn't understand how it could be done as back in 2000 very few people knew about the crochet method.

I would pull out my hook, maintain a couple of my dreads and show them what I did and they were amazed at how quickly working the hook through my new growth could lock the hair. Instantly! They would immediately ask me to do some of theirs and then their fingers would move up to their previously loose roots to feel my work and they'd laugh out loud in excitement at the wonder of the immediate locking nature of crochet work.

Over the years I discovered that about 99% of people with dreads spent ages trying to get their hair to lock by rolling, waxing etc and this included African people and others with afro hair that is naturally matted. I watched and learn how African's made dreads at home when I spent 8 months in Africa and despite having perfect hair for locking  - hair that matts itself easily - the neat, tight well formed dreadlocks never formed on their own, never formed in a days work and still took months before they were tight and secure enough to wash or wet.

I began creating instant locks on my travels after doing a year of free maintenance for people in the year 2001 in Uk. It's the only way I have ever made dreads and they are always instantly locked. There's no rolling, twisting or locking products needed and there's little work to be done on an ongoing basis except for having maintenance done a few times a year. All my clients love their dreads and feel especially lucky that they don't have to fuss over them and spend hours each week working on them to get them to lock.

The best thing about crochet made dreads is that they are made in a day (or 2 depending on the speed of the Loctician or person creating them) and that's it. Rather than the person needing to go and roll them or twist them each day (as with other methods), they are free to just enjoy them and live life simply without fussing over their hair. They don't need loc peppa, wax or special locking shampoos, because the dreads are actually properly locked from day 1!

I think most people today get dreads because they're not into fussing about their hair, it is often part of a spiritual journey, but sometimes it is purely about the look. No matter what the reason, instant crochet made dreads keep it simple. There's no waiting, no shrinkage, no looping up and out and none of those crazy "I need a beenie coz my hair looks so bad" days.


I do understand the "freeform" dread crew and rastafarians or other people who choose to have dreadlocks for religious or spiritual reasons and who believe the dreads have to form on their own. But that is their choice and they are entitled to make that choice and go through the long journey to getting dreadlocks. It is not for everyone and that is okay. We are all different. If we choose to get dreads or let dreads form in our hair, it is OUR PERSONAL CHOICE and I don't think it's right for anyone to say that you shouldn't create dreads this way or that.  Each individual is entitled to make their own journey....but if you don't want to have to take time to work on getting your dreads to become dreadLOCKS then I fully recommend finding a good crochet hook or Divine Hand and Hook Loctician - or grabbing one of my courses and learning to DIY with the crochet hook yourself.

You'll save loads of time, effort and money in the long run (as you need no products at all except a natural shampoo) and be able to enjoy good dreads from the start.

But if you want to go on the journey to form dreads, then that's awesome too!

Peace, love and acceptance to all!