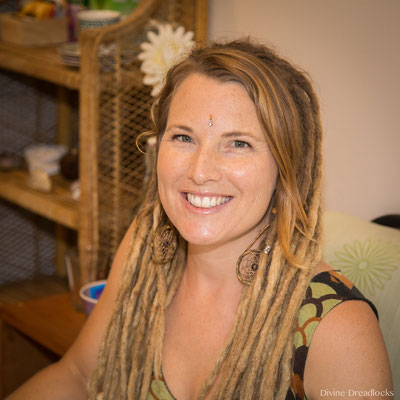 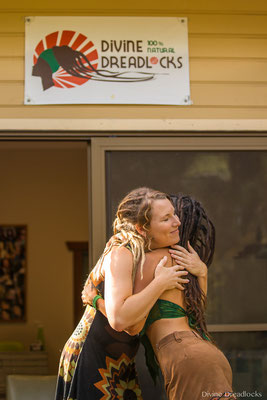 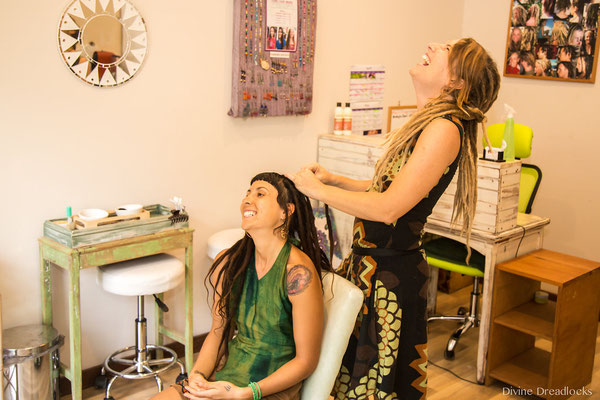 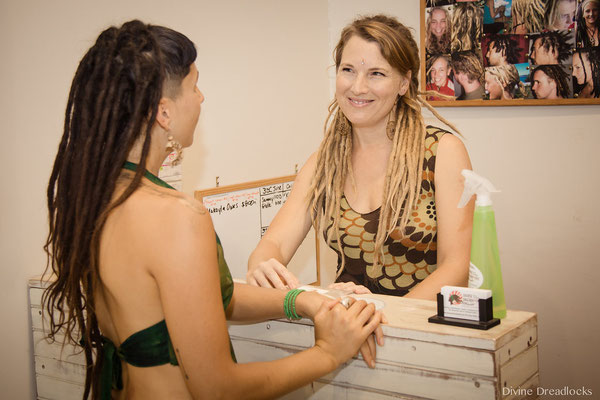 In the year 2000, Ema set off on an open ended adventure around the world and to celebrate her new simplified lifestyle, with minimal possessions and budget, she decided to get her hair transformed into dreadlocks in Thailand. She felt that having dreadlocks allowed her to forget about conventional western female concerns, such as hair and looks and keep her toiletry bag much lighter. Her dreads allowed her to feel she could better express on the outside, who she was on the inside  - a little bit unconventional.


A few months after getting her locks, she discovered that her hair didn't dread on it's own (!!!), so rather than let them get scruffy, she bought a crochet hook in India and began to lock and maintain her own re-growth.

As her dreads grew she received many comments on how neat & tight they were and most people asked if she rolled them a lot. She soon discovered that the majority of people with dreads back at that time, either had messy ones or spent a lot of time rolling & waxing to get them to encourage them to be neat & tight. She'd never had this difficulty, as her hands and the hook meant she only spent a few days twice a year working on them. And they were always neat & tight. No-one she met knew about the crochet hook method.


That's when the requests to fix others dreads began, so initially, just for the love of it (or a trade) she worked on fellow traveller's dreads and make dramatic improvements. After a year or so she realised she had a unique skill in a niche market and began to charge a small fee when working in Brighton, UK. Em travelled to 25 countries and did dreadlocking in 8 of them to supplement her travels.


And on return to Byron Bay in 2006, she turned her skill into a hobby business & gave it the name Divine Dreadlocks. Her reputation grew with word of mouth, then a website started bringing clients from interstate and soon she was booked out for 6 months in advance with clients booking from as far away as Germany.


In 2009 she became a teacher of Art, Design & Technology and then paused to have a baby in 2011. No longer working Monday to Friday, business increased and Ema began to teach her trade to others. The demand for top quality dreads never ceases and Divine Dreadlocks keeps growing.

From 2013 she has become very passionate about sharing her amazing skill with others to teach people how to maintain their own dreads, make dreads for loved ones and become Natural Dread Locticians.

She has only ever received 5 star reviews for her dreadlock work and training! And is most passionate about empowering others and running an ethical, eco-friendly business!

"It's the rare and very intimate connections I make with my clients during each & every appointment, that I love! For a gypsy who has settled down in a small coastal suburb, it keeps me alive! Instead of me travelling and going to meet new people, new people are travelling & coming to meet me. Despite being in the same environment, in some way it helps me to still feel the joy of travelling - it's just that it's from my own studio at home with my family around me! Thank you to all my clients for and students for your continuing support over the years!! May your life be happy, healthy & filled with love!" 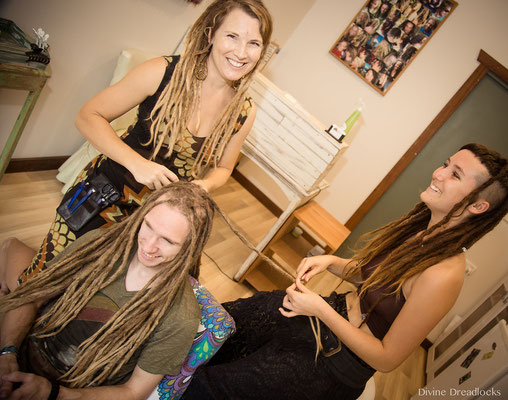 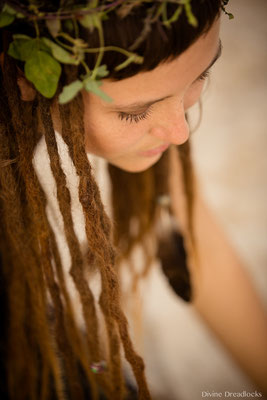 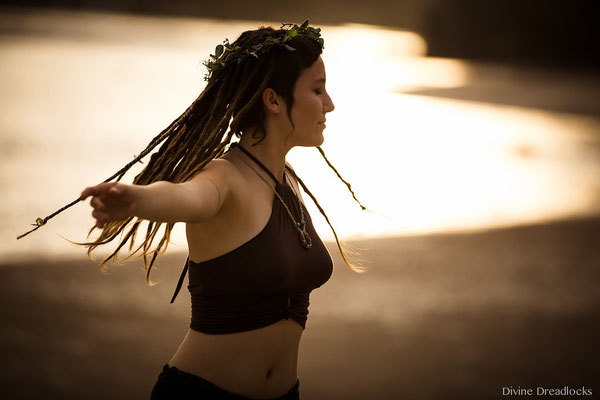 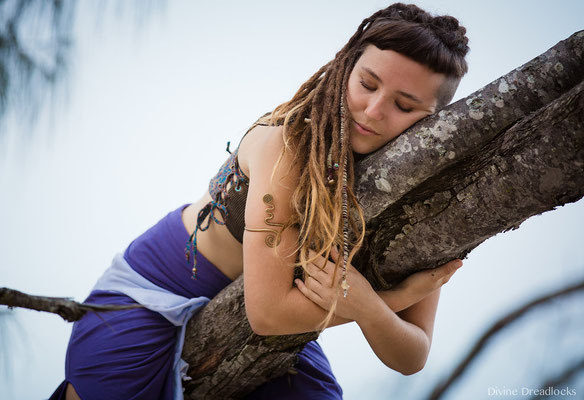 Mahalia fell in love with dreadlocks as a teenager and saved up to get them after finishing high school. Sadly she wasn't that happy with the results, so she taught herself how to fix them up using the crochet hook, by watching some YouTube videos and learning a bit from friends with dreads. Her skillful hands set at improving her own dreads & she found she enjoyed it so much she set up at Earth Frequency Festival to do a bit of locking. She gained a couple of clients who were really happy with her work & maintained their dreads for about a year before applying for a Trainee-ship at Divine Dreadlocks. She got the position over 8 others!

After nearly a year of juggling dental nursing with her dreadlocking, she completed the Online Natural Loctician Certificate to learn how to set up her own little dread business as well.

Working at Divine Dreadlocks and starting up her own small locking business, Mahalia managed to quit her unsatisfying dental nursing job and now focuses more on what makes her happy!

Outside of locking  Mahalia enjoys spending time with friends, learning about healing herbs and self sustainable living!
She is now a disability care support worker and takes on her own dreadlock clients to supplement her income! 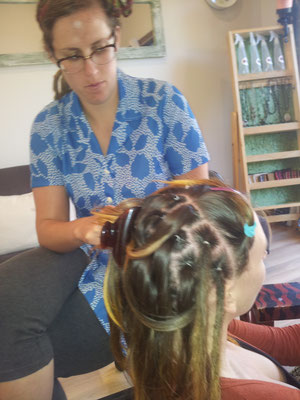 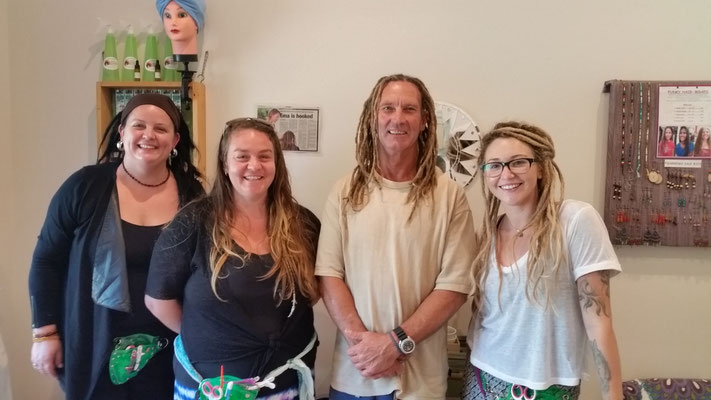 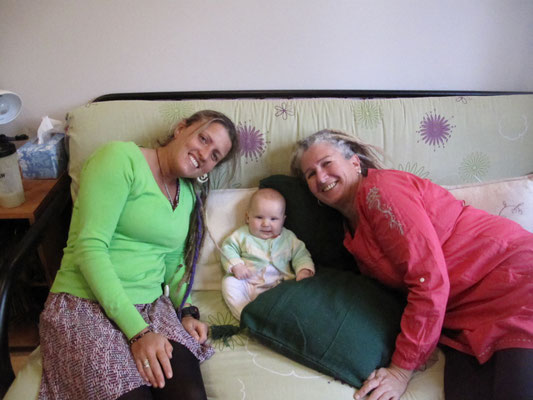 Last pic: Dom (on the left)